Today we have such a beautiful and easy craft for you.  Dried Orange Garland seems to be all the rage this year.  Given the fact that it is such a simple yet beautiful, eco-friendly, and inexpensive holiday decor – I’m not surprised that it’s become very popular.  We are going to show you how to make your own Gorgeous Dried Orange Garland.

From what I understand dried citrus or orange garland is a Scandinavian Christmas tradition.  Since I love different cultures, this made it even more special.

This is also a great craft to get your littles involved in after the orange and lemon slices have been dried.

Cut your oranges and lemons

The first step in making dried citrus garland is to cut your orange and lemons slices.  There are a few tips that I have to do this properly.  The first is that you need to have a good knife for cutting.

I found that it was easier to cut the oranges than the lemons.  The lemons were harder to cut evenly and to cut into thin slices.  I wanted to try different citrus fruits so that’s why I decided to do both oranges and lemons but it’s completely up to you.

As mentioned, I did need two different baking sheets to dry all of my citrus slices.

Make sure to arrange them neatly on the baking sheet so they don’t touch each other.

Bake Your Citrus Slices for the Dried Orange Garland Project

Since you have already preheated your oven to 200 degrees F, then place your baking sheets with arranged citrus slices into the oven for 4-6 hours (see specifics on timing below).

I tried two different techniques.  I put one sheet into my top oven that has a convection setting.  Then I put the other sheet into the bottom oven that just has a regular “bake” setting.  Both top and bottom ovens were set to 200 degrees.  I wanted to test to see which technique worked better.

In my experience, the convection oven worked better as it dried the orange slices faster and did not brown them.  It took approximately 4 hours in the convection oven for the orange slices to dry completely.  The regular oven took about 5 ½ to 6 hours for the citrus slices to dry completely.  Also, the citrus slices in the regular oven did brown a bit more.

My suggestion is if you have convection oven setting that it’s preferable to use that if possible.  If you just have a regular “bake” setting then that absolutely works, too, maybe just turn the citrus slices every hour to prevent too much browning and remove the slices that are done.

I let the citrus slices dry out completely in the oven so they were somewhat crisp when I took them out.

Also, on both settings the lemon slices completely darkened.  When I started stringing the garland I just used this as a pattern (as you will see in upcoming steps) and I put strung three dried orange slices and then one lemon slice.  Even though it wasn’t planned that way I like the way it came out.

I also advise to not make yourself crazy trying to make everything perfect.  Sometimes the beauty is in the imperfections.

Let the citrus slices cool down for a little while before I stringing them onto the twine. This shouldn’t take too long.

Poke Holes into the Citrus Slices

Use a pointy object to make two parallel holes into the orange and lemon slices.  Make sure to poke the holes in the flesh of the orange and not the peel.

I used the pointy end of a meat thermometer.  You can use that a knitting needle, point of scissors, or a fork.  The meat thermometer worked well because I could start with a small hole and gradually make it bigger.

I chose to make two holes on the edge of the orange (close to the peel but still in the flesh of the orange/lemon) that way I could use the twine to thread the twine in one hole and out the other.

Thread the Orange and Lemon Slices

Next, I take the twine to thread the holes I just made in the previous step.  You can also use yarn or clear fishing wire. Before I start threading though I take a piece of scotch tape and tightly wind it around the end of the twine (kind of like the end of a shoelace).  This will help you to thread the twine easier and not have the end fray.

I take one piece of sliced and dried orange/lemon at a time.  If there is a better side to the citrus slice I made sure that is facing forward.  First I thread the twine from front to back into the hole on the right.  Before I thread the other hole, I place the orange where I want it to go on the garland string.  Since this is the first piece I place it towards the end of the piece of twine and tie a knot on the end of the twine so it doesn’t fall off.  Then I thread the second hole from back to front.  It’s kind of like sewing.

Also, how closely you place your citrus slices is up to you.  In the beginning I was going to put about a  2 inch space in between slices but when I started threading them deciding to put them right next to each out without spaces.

Also, as mentioned earlier because I have lemon slices and they turned out a bit darker, I put three oranges then 1 lemon slice in my garland and made a pattern.  You could also incorporate additional things like cinnamon sticks, pine sprigs, etc.  I just stuck to the citrus slices.

Continue your pattern until all of the citrus slices are strung.  Then add a final knot on to the twine.

This is the first year that I have made Dried Orange garland. From my research it seems as though it can last up to 7 years if stored correctly. It should be stored in an air-tight container. I am planning on putting mine in a large ziplock bag and pushing any air out and then storing in an air-tight plastic container as well.

This was such a fun project. I’ll be sure to store the garland that I made this year and also make some more next year to decor other areas of my home with it.

Another fun idea is to make dried orange ornaments! You use the same technique as described above except you would only make one hole in the top of the orange slice and string a short piece of twine through it. I also tied a gold bow on the top of my ornament to fancy it up a bit.

If you enjoyed this project be sure to also check out our DIY Hand-painted Poinsettia Ornament tutorial, too.

Wishing you a very Merry Christmas and Happy Holidays!

This site uses Akismet to reduce spam. Learn how your comment data is processed. 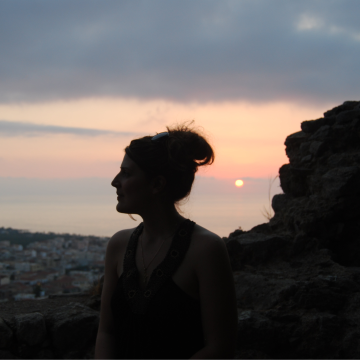 Hi, I am Alexis, the creator of Blooming Creativity. I'm so glad you're here. This is a place where I combine imagination and positivity to make beautiful things. Read More…

Stay up to date

We have all kinds of creative and fun Merch!  Take a peek at our Bloom Attire Shop!

Bring Out Your Inner Artist!

Be the first to get our latest creative ideas, crafts, kid's crafts, and home decor + access to our FREE Printables Library.

All you need is creativity. And coffee. Must have coffee.

Get our adorable Holiday Printable Stickers! This

Feeling some Fallspiration today with the beautifu

Do you want to incorporate more creativity into yo

Easter is right around the corner! There’s stil

Wishing you a very Happy St. Patrick's Day. I hop